"Can we make time to see Monino?" That was the first thing Mark asked when we started planning an adventure on the TransSiberian Railway.

And of course, I had to ask what was there...

So there was no doubt that we'd have to add a day to the itinerary to fit that in...

...Especially when I learned that it wasn't all Yaks and MiGs but there were some great WW2 and antique airplanes there as well.

What Is Monino Really Called?

This aviation museum seems to have several names if you're looking for it on the internet....

We just call it Monino when we talk about it... that seems so much easier.

The short answer is just outside of Moscow.

Having been there, we can tell you this from experience... the distance doesn't matter so much as the traffic! Especially if you try to go on a Saturday like we did. When we looked it up, the consensus seemed to be that it should take about 45 minutes to get there from Moscow. 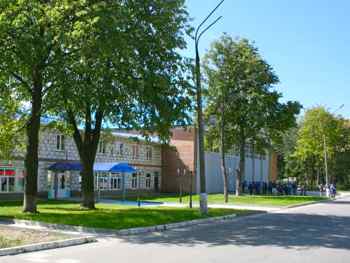 It's slightly to the northeast of Moscow, and there seemed to be LOTS of people headed for their dachas...

...and any traffic rules went out the window.

It didn't seem to be particularly well marked either... so we were really glad our driver knew where he was going!

It's right along the Gorky Highway and tucked into a pretty, wooded area. The planes were collected here because this is the site of the Yuri Gagarin Military Air Academy. Apparently in 2008, this academy was merged with another to become the Gagarin-Zhukovsky Military Combined Air Force Academy, but it still retains some facilities at Monino.

So What About Antique Airplanes?
What's There? The Planes! The Planes!

Monino bills itself as one of the world's largest aviation museums. That's probably true... especially if you're talking about Russian aircraft.

And it does start with antique airplanes.... the Sikorsky Ilya Muromets flew during World War 1!

You'll definitely see lots of Antonovs, Yaks, MiGs, and Ilyushins, but you'll see some great old Russian airplanes too that were built during the 1920s, 30s and 40s...

...like the Ilyushin Il-2_Sturmovik that flew during World War 2.

All the way up to the post WW2 jets and a bunch of weird and wonderful planes that you won't find anywhere else.

Think of it as the Russian version of the US Air Force Museum at Dayton.

You'll see planes here that are hard to find elsewhere, but some of the displays are still a bit rough. They're working on the hangars and making the displays better.

...and we all wished we could get closer to the Bartini-Beriev VVA-14.

When I told Mark to make me a list of planes that I should show you photos of, he gave me such a long list that I'll break it into a couple of pages.

I love those antique airplanes, so I was more drawn to the Monino WW2 planes.

Mark loves anything that flies, so he went crazy with the "newer" Soviet Era props, helicopters, and jets. 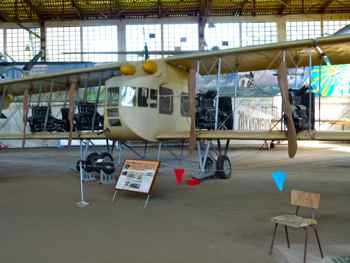 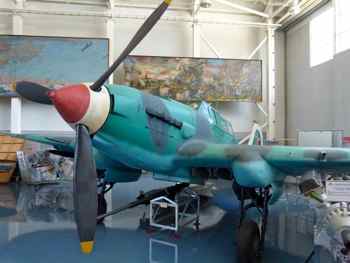 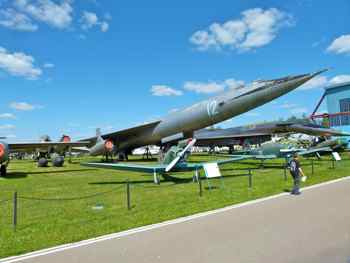 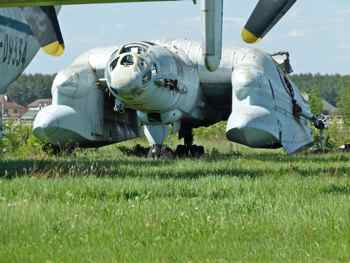 On Guides, How To Get There, and the Facilities

There are apparently ways to get there by public transportation, but I wouldn't try it... nor would I ever consider driving after what we experienced! (Not to mention that the few signs we saw were only in Russian.) 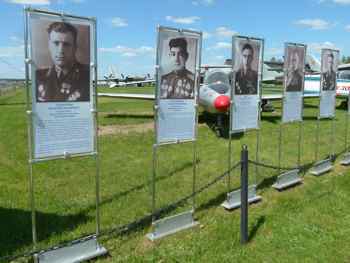 We had a guide with us, but we also had one assigned to us by the museum.

We had heard that tours are given by ex-pilots...

...and photos of Soviet pilots line the walkway at the entrance to the outdoor exhibit at Monino.


Our assigned guide was not a pilot, but she had worked at the Russian Aviation Museum for years and was very proud of it. She spoke only Russian, so our tour guide had to translate for us, but she was very knowledgeable about the aircraft. It was interesting hearing about the planes and history from a Russian point of view.

There is no bookstore, but we were able to buy a little booklet that has photos and descriptions of most of the planes. 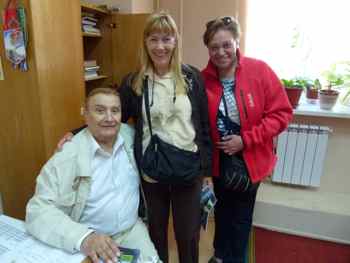 We bought it directly from one of those ex-pilots. Ret. Col. V. Kazashvili wrote the book.

He has an impressive list of types of aircraft flown and quite a title: "Honoured cultural worker of Russia, chief of museum, department of the Central Air Force Museum."

And we got the photo too!

There are two hangars housing the older planes (when we were there), and lots of planes on the field. Most of those outdoor planes are in pretty good condition though they look a little weathered... not surprise considering the Russian winters. Most explanations are in Russian, but there are some in English now.

Do you know how hard it is to take notes when the descriptions are in Russian? That's my job when Mark is taking photos! I think we got most of it right for you. 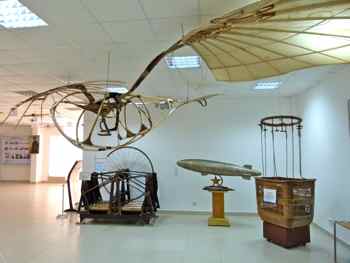 In the administration building there are some interesting exhibits... uniforms and engines and models of planes and dirigibles.

As to other facilities... they are pretty limited. There are toilets, but our guide apologized for them before she took us to them. There is no food or beverage service. (They are closed for an hour lunch break on days that they stay open later... so I guess you'd have to take a picnic lunch.)

When It's Open; What It Costs

I can't really tell you what we paid for admission because we set it up as a tour for four of us. We had a driver and guide. It did cost extra for the camera... 200 rubles I think. If you wanted to take video, that was another fee, but the planes aren't moving, so one fee was enough for us. We've heard that you no longer have to get official permission to visit the museum, but our agency told us that they had to submit our passport detail to reserve the tour... Having said that...

It was not hard to arrange a visit. The tour agency that arranged it for us simply told us they had to submit our passport information, and we had it all arranged. When we went, the museum was closed on Sundays and Wednesdays. We were perhaps a little rushed because it closes at 1:30 on Saturdays, but we figured a rushed visit was better than no visit. (And we would have had another hour if the traffic hadn't been so bad!)

There were quite a few people visiting when we were there... it was a beautiful day in May, so that probably brought the locals out. There were other foreign visitors as well. We've heard that the days and hours of operation might be subject to change, so be sure of your arrangements.

And if you're not planning a trip to Russia, for now just click on some of those photos above, and take a look at some of the great planes we saw at Monino WW2 Planes and Soviet Era Planes.