When I asked Mark to choose photos to show you, he didn’t even put down Wildcats, Hellcats, Bearcats or Tigercats….

We all KNOW none of those are common…

But the The National Museum of Naval Aviation has such a great collection of rare and one of a kind antique airplanes and warbirds that we can’t show you all of them.

We can only show you a few to entice you and tell you….

You just gotta go and see for yourself. 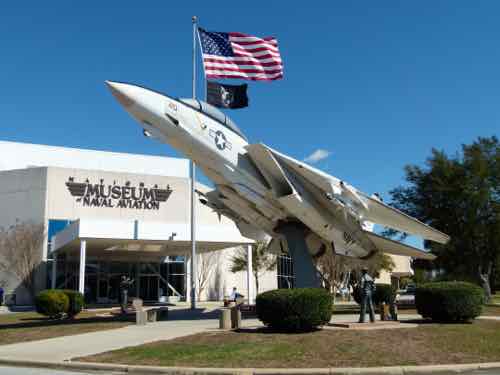 Mark says if you go for only one plane it should be the NC-4….

Why?  Because it made the first transatlantic crossing…. because it was such a big plane, and because it accomplished this so shortly after we started flying. 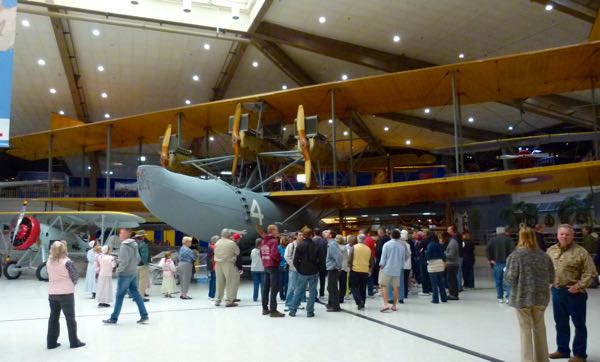 It was in May 1919 when the NC-4 made that first transatlantic crossing… One of three that made the attempt together.

They went from Rockaway, Long Island, New York to Halifax, Nova Scotia… then started the crossing to the Azores.  1,200 nautical miles.  NC-1 and NC-3 didn't make it all the way.  (NC-2 had been cannibalized for parts before they left.)

That was pretty remarkable.  Great strides in aviation.

The Early Years of Naval Aviation

OK, but why would you go for only one plane!  Let's look at some of the early planes that they have at the Naval Aviation Museum. 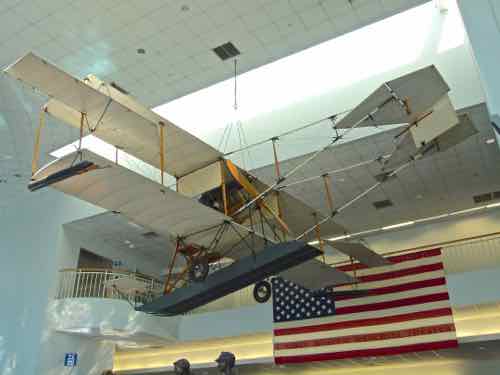 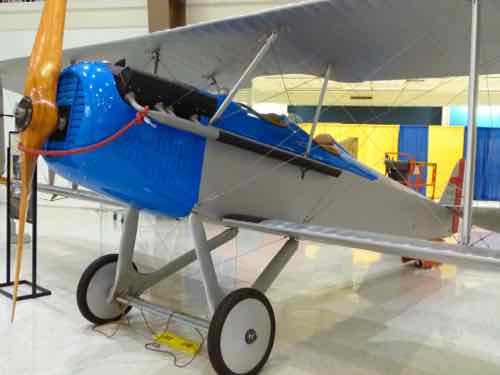 Both of these early examples are replicas.

The Curtiss A-1 Triad was the U.S. Navy’s first plane.  Glenn Curtiss IS considered the father of naval aviation after all.  The A-1 had retractable landing gear so it could operate from land, sea and air… a triad, eh?

The Vought VE-7 was used on early aircraft carriers... making the first ever take-off from a U.S. carrier (the Langley (CV-1)) on Oct 17, 1922.  Some were later delivered with floats. 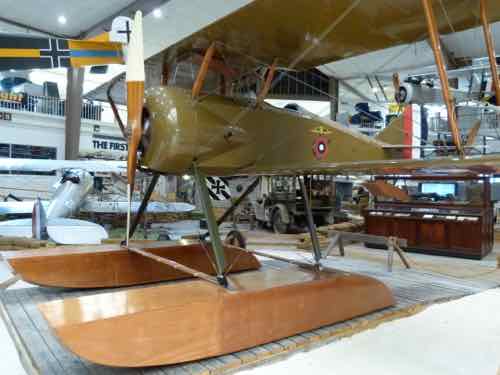 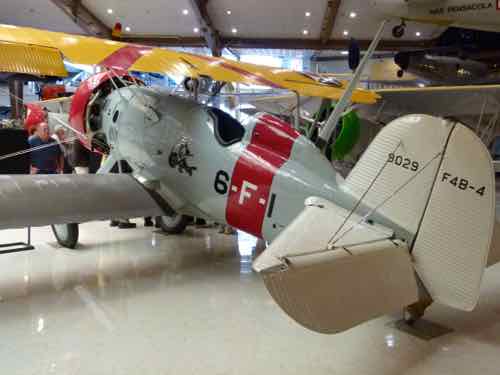 Most Tommys were delivered to the Army with wheels.  The Navy had some which were delivered as S-5s because there were fitted with wooden floats.  Those floats were a little ungainly… and had to be emptied of water on the ground after each flight!  The Naval Aviation Museum displays theirs with the floats as the Thomas Morse S-5.

Boeing built planes for the Navy?  You may know this little gem as the P-12… that’s the Army designation.  The Navy version… this Boeing F4B-4 was built for carrier operation. 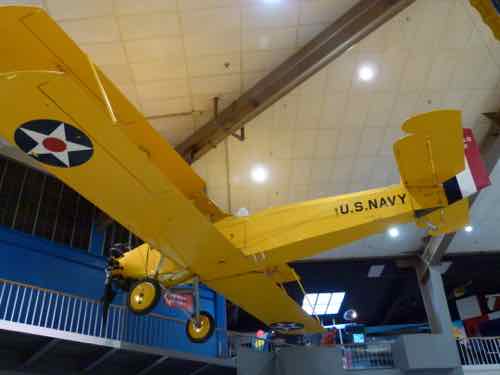 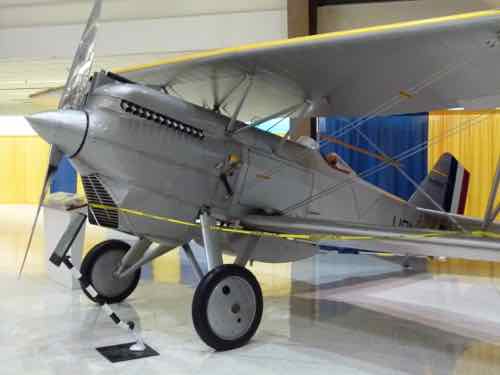 The Curtiss N2C Fledgling is an example of different versions that were used primarily as trainers.  In the 1930s some were equipped for radio control.  The Naval Aviation Museums site says… “One drone was used to execute an attack on a target ship, a precursor of today's anti-ship missiles.”

Part of the Curtiss “Hawk series”,  the Curtiss F6C-1 was one of the earliest aircraft with an airframe strong enough for steep dives.  Because of that it served a role in developing the tactic of dive bombing.  Other aircraft of this type were fitted with tailhooks and designed F6C-2. 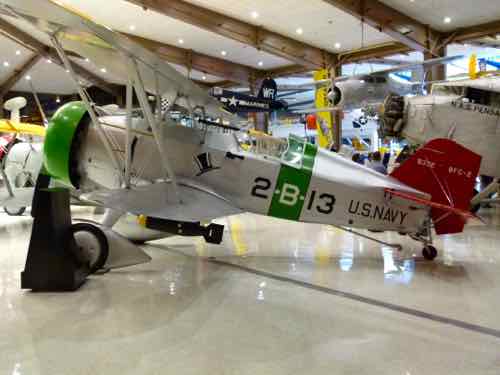 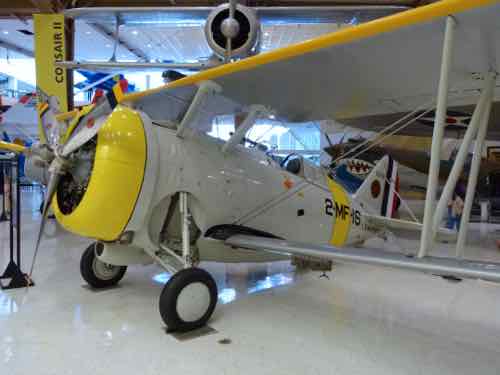 The Curtiss-Wright BFC-2 Goshawk is another in the Hawk series of dive bombers.  One fact that I find interesting… this plane had an unusual half canopy because pilots of that era disliked closed canopies.

The Grumman F3F-2 was the last biplane used by the Navy. 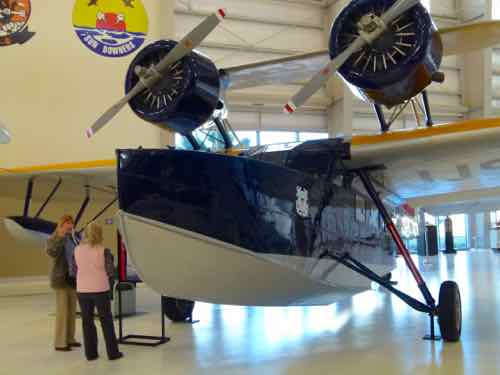 The plaque next to this plane says “Douglas Dolphin Serial No. 1280.  The only one in existence.”

Once owned by Bill Boeing… Now think about that…. a Douglas aircraft owned by Boeing!

It was later owned by Dr. Colgate Darden III.  There is a long story here, but we were privileged to fly in the Dolphin once… we even were treated to a water landing…. something we’ll never forget!

We skipped over all the great WWII planes because most of those you can see at other museums.

There are a couple of rare planes from that era…. probably rare because they were not great successes…  Mark always likes to see examples of aircraft that he’s never seen, so here they are… 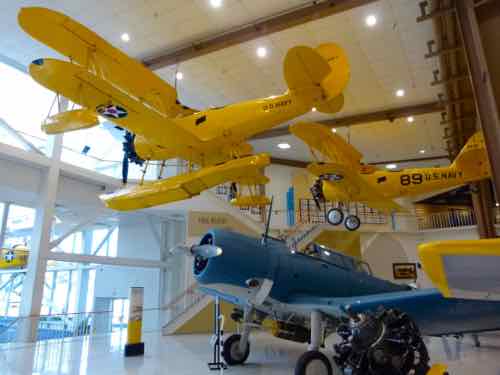 Oh just by the way… Hanging above the Vindicator are two planes from the Naval Aircraft Factory.. NAF N3N-2 (with floats) from 1935 and one with just wheels from 1941.

This Vought SB2U-2 Vindicator is the only known example of the aircraft in existence.  Early in WWII they were already obsolete.

This Brewster SB2A Buccaneer is probably the only one on display anywhere… there may be one in storage in Pima.

This one was not only obsolete when they were built, they were, according to the Naval Aviation Museum, “Overweight, underpowered, and lacking maneuverability… a classic failure.”

I guess that means unsatisfactory... they were never used in combat. 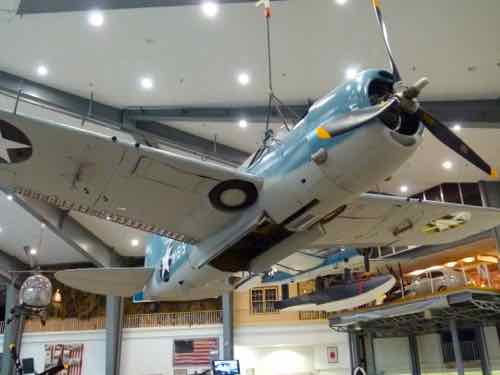 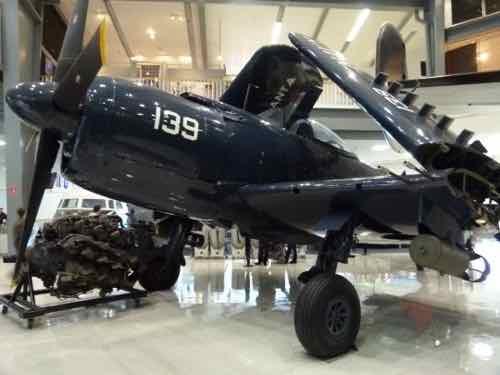 Though the Martin AM-1 Mauler carried a 10,689 pound load aloft setting an unofficial record for a single-engine aircraft… the aircraft type had many technical problems and its career was short-lived.

It had a tendency to bounce on carrier landings… causing the tailhook to miss the arresting wires...

The Douglas Skyraider, which was developed at the same time, won this battle… the Naval Aviation Museum does have a Skyraider… but you’ve seen one haven’t you?  Have you ever seen a Mauler?  Only four are thought to still exist and this may be the only one on display.

Here’s one that was pretty successful…. 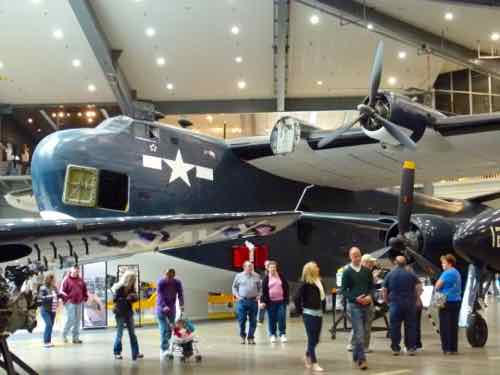 This is the last known surviving Coronado.  The Consolidated PB2Y-5 Coronado is larger than Catalinas.  Several versions came out during WWII.  For most, front line service was limited.

This aircraft took the staff of Fleet Admiral Nimitz to Tokyo for surrender ceremonies on Sept 2 1945.

And a real experimental one…

And a winner even if you don’t know it. 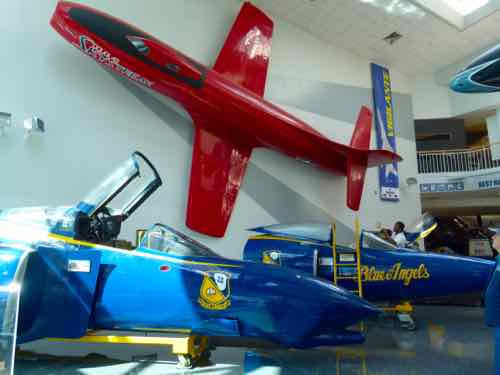 The Douglas D-558-1 Skystreak was a single engine turbojet-powered aircraft that took off from the ground under its own power.  They were built to explore transsonic and supersonic flight.  Only three were built.  One eventually reached Mach .99 in level flight… only flying supersonic in a dive.

The record was quickly overshadowed by Chuck Yeager and the Bell X-1 which was the first to break the sound barrier on October 14, 1947.

...but glory does go the the fast and famous.  Right? 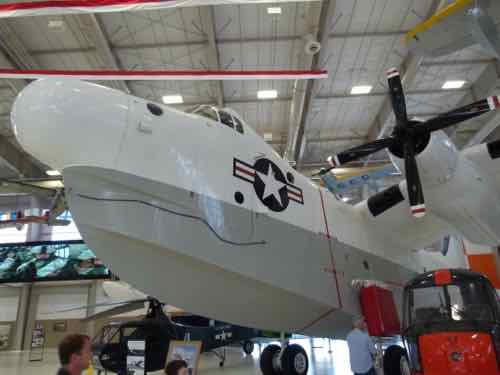 Marlins were key components in the Navy’s antisubmarine mission.

The Martin P5M/SP-5B Marlin    was the last flying boat operated by the Navy, and this is believed to be the last remaining example.

It's hard to see in this photo, but this Douglas F4D-1/F-6 (B) Skyray is a Delta wing design... sort of stingray-like shaped wings... thus the Skyray.

The F4D holds the distinction of being the first carrier aircraft to hold world speed and climb records. 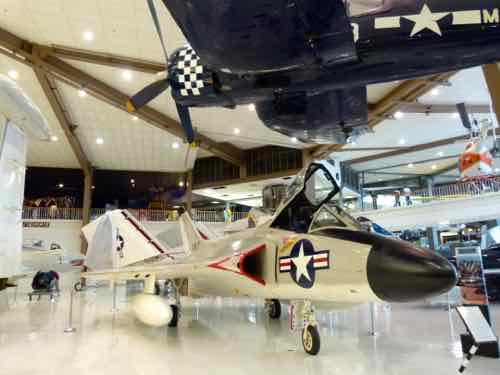 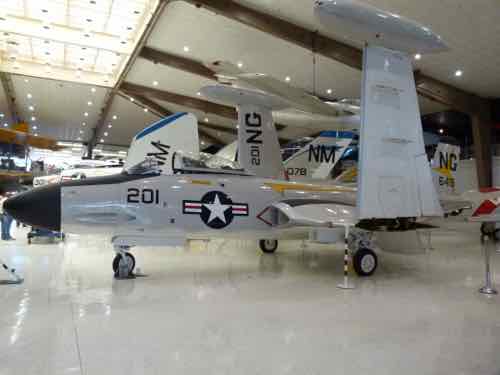 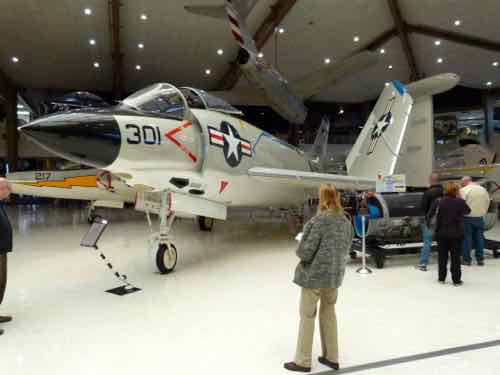 Banshee... The official nickname of the McDonnell F2H-4 came about because the engines “screamed like a banshee”.

The Demon was the McDonnell Aircraft Corporation’s first swept wing aircraft.  There were many troubles with the aircraft, but it provided the basis for the development of the F-4 Phantom II.  One of only 3 surviving McDonnell F3H-2M Demon. 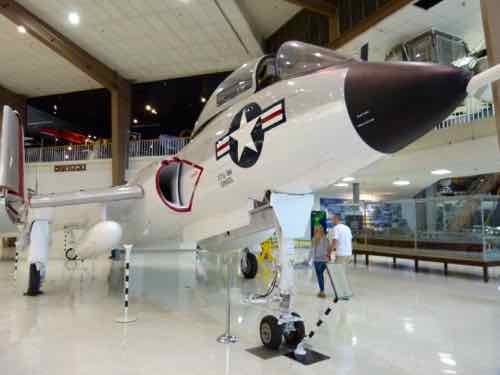 Designs always seemed to be ahead of the curve when it came to power…  The Chance Vought F7U-3M Cutlass was one of those.

The Naval Aviation Museum itself says the F7U was ahead of its time...

...and ahead of the capabilities of available power plants, resulting in its nickname the "Gutless Cutlass."

Here’s what you’re up against… or thrilled with when you walk into the Naval Aviation Museum... 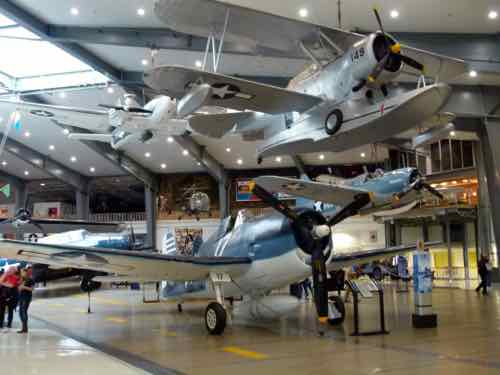 From the top…
Grumman J2F-6 Duck
Brewster SB2A Buccaneer,
Grumman F6F-3 Hellcat
.....and a bunch of others.  So many planes it's hard to get a clear shot.  But it sure is fun!

And of course… The Blue Angels 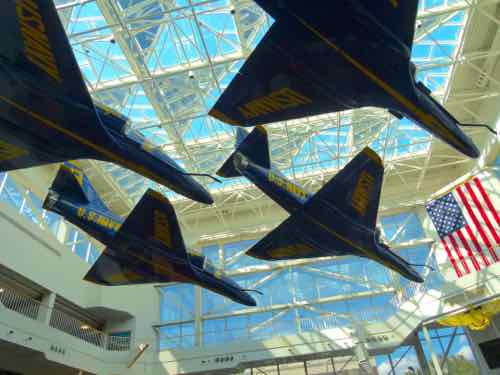 These are the A-4 Skyhawks that the Blue Angles flew between 1974 and 1986.  Three of these aircraft were part of the demonstration team… all four flew in Vietnam.

The National Naval Aviation Museum is located at the Naval Air Station in Pensacola, Florida.

Admission and parking are free.

Hours:  Open daily from 9 am to 5 pm except for the US holidays of Thanksgiving, Christmas and New Year’s Day.

Be advised:  Because you’re entering a Naval Air Station, all visitors 16 and older must present valid identification for entry to the air station.

Facilities:  There is a cafe that is open around lunch time.  The store is open pretty much when the museum is.  And of course, there are plenty of restrooms.  All are handicap accessible.

Tours:  You may tour the museum on your own or take a guided tour.  Guided tours are available for free and are guided by retired military volunteers.  The museum has a self guided tour for those who want to download it.

Flight Line Trolley Tours:  In addition to the planes displayed in the buildings, there are about 50 on display outside.  You can see these with a free 20 minute tour on a flight line trolley.  If you want to do this, get your free tickets early… the last time we went, we didn’t and the tickets for that day were already gone.

Allow plenty of time to see the Naval Aviation Museum.  They have so many great planes.  Last time we went with friends, we had to leave far to early... you can easily spend all day.