Duxford and Shuttleworth Two Of The Best

Your family wants to see castles and museums... you want to see airshows in England.

How do you plan your trip?  Where can you go in England to see antique airplanes? How do you convince them?

How do you convince them?

We wrote an article for MouseTours Travels about just that...

And we thought we'd reprint it here.

Hopefully your family is ready for a break from castles and museums...

Maybe you've gotten into the great outdoors to explore Stonehenge and some of the other megaliths...

But you want a little more action and they're ready to go along with you!

Airshows In England Every Weekend

There are airshows all over the United Kingdom. You can find one... or two... every weekend from March to October.

There are military airshows at Royal Air Force Bases and displays featuring antique airplanes... or antique aeroplanes as they like to say... at museums from north to south.

If you want to spare yourself having too look all over the British Isles for times and dates, there are two big venues for airshows in England fairly close to London.

You need look no further than the Imperial War Museum Duxford and The Shuttleworth Collection. 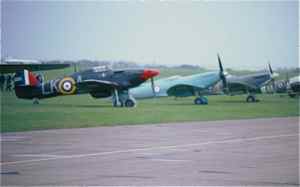 The Imperial War Museum Duxford is a great place to see vintage aircraft. The museum is open all year.

You can expect to see rare and historic aircraft on the ground and in the air.... World War II aviation legends like Hurricanes and Spitfires.

There are less well known legends like the Gloster Gladiator... or how about a Hawker Hind?

Duxford was first in use in World War I. It was a Royal Air Force Fighter Station in World War II. When it was closed, it was turned into the great museum it is today

If you're into Mustangs and other American "warbirds", there's a great American Air Museum on the grounds.

If you're interested in seeing even older aircraft, visit the Shuttleworth Collection, in Old Warden, near Biggleswade.

They specialize in "Edwardian Flying Machines." The emphasis of their museum is on planes that are from the early years of flying, World War I and the 1920s and '30s between the wars.

There are some World War II aircraft and some that visit on flying display days.

The Shuttleworth collection is dedicated to keeping even the oldest of their planes flying, and they schedule flying displays throughout the airshow season.... the airshows take place subject to "weather, serviceability and availability" according to their website.

Conditions have to be just right for some of these fragile old aircraft, and the planes themselves have to be ready to fly...

If that sounds like they almost take on a life of their own, they do. The pilots learn to listen to the old planes, and if something doesn't sound quite right, they don't fly.... but you can still see them on the ground.

These old planes take off and land on grass, and that's fun to see all by itself.

The Shuttleworth Collection is just a couple of miles off the A1 Motorway about 30 miles (48 km) north of London.... you can drive it in about an hour.

See Both - They're Close Together

If you want to visit both, you'll probably have to settle for a flying day at one and a visit to the museum at the other... but that's not bad.

They are about an hour or two apart over country roads.

On rare occasions they have flying displays the same weekend... you could see one on Saturday and one on Sunday...

How's that for seeing the best airshows in England?