Participate In Daks Over Normandy

We learned about the D-Day Squadron when we were at the Oshkosh AirVenture 2018.  They are a a group of individuals and organizations that have historic, restored C-47 aircraft.

The D-Day Squadron is preparing to lead a contingent of American C-47 aircraft in a trans-Atlantic trek to participate in the Daks Over Normandy event from June 2-9, 2019.

To commemorate the 75th anniversary of D-Day on June 6, 2019 they will join with an international group of planes to participate in a mass flyover across the English Channel. 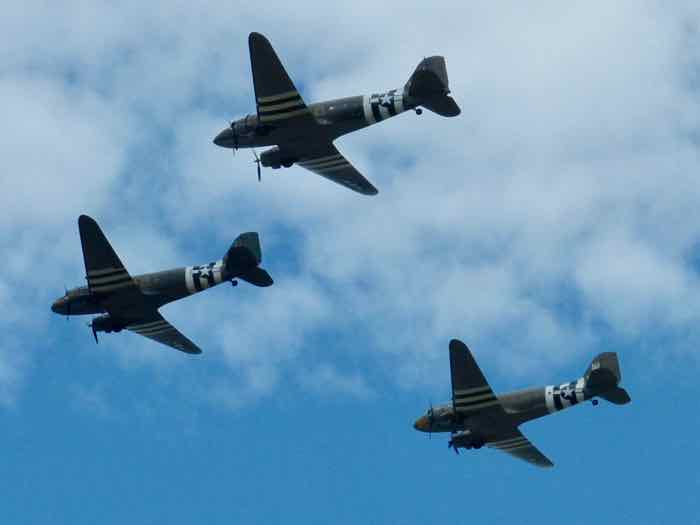 In Normandy they will drop 250 paratroopers over the original 1944 drop zones.

The organizers say that the skies will be filled with dozens of restored C-47 aircraft and hundreds of paratroopers billowing through the sky in authentic Allied uniforms and World War II military-style parachutes.

“The event will be the largest assembly of these authentic War aircraft and paratroopers since that fateful day on June 6, 1944, all to honor the service and sacrifice of the soldiers who risked life and limb to bring the beginning of the end of the War in Europe.”

Wait A Minute! How Do They Get There?

These are C-47s based in the United States…. They are vintage aircraft which have been lovingly restored to keep them flying.

So how will they get to Europe to participate in this Daks Over Normandy event?  The same way the aircraft got there during World War II.

These historic aircraft will depart and travel together on what’s known as a Blue Spruce Route. This flight plan traverses the North Atlantic, allowing for fuel stops and guidance from ground-based navigational aids on the landmasses located along the route.  (Click on the photo for a larger image.)

Each site was selected because of its history as an active airfield during World War II that would have been a stopping point for aircraft flying to aid in the War.

They will assemble at Duxford, part of the Imperial War Museums in the United Kingdom.

It's not only the D-Day Squadron... Aircraft from around the world will participate in events both before and after the June 6 flyover.

In the U.K. from June 2 - 5 at IWM Duxford Airfield, close to Cambridge…

And from June 5 - 9 at Caen Carpiquet Airport in France.

Both these locations have been carefully chosen by the event organizers for their location, logistics and their wartime heritage.

Can You See This Event?
Yes...

See The Aircraft, Meet the Crews....
.....Flying and Static Displays

All crews of all aircraft will be present to show you their planes. They are there to answer questions, and under their supervision you can board the aircraft.

All aircraft that fly on a particular day can also be observed, but will be parked separated from the visitors.

Around 250 parachutists that have come from over 20 different nations will be dressed in 1940s style uniforms. They will train and prepare around the aircraft for the Big Cross-Channel jump that is planned for the evening of 5 June 2019, into one of the original 1944 drop zones in Normandy, France.

They intend to organize scenic flights for visitors with the original DC-3 Dakota’s / C-47s.

In the United Kingdom these flights will take you over the country side of Suffolk and Norfolk, where during the war the RAF and the US Air Forces had an large number of airfields which can still be seen today.

In France the flights will take you over the historic battlefields, the original drop zones and the invasion beaches. 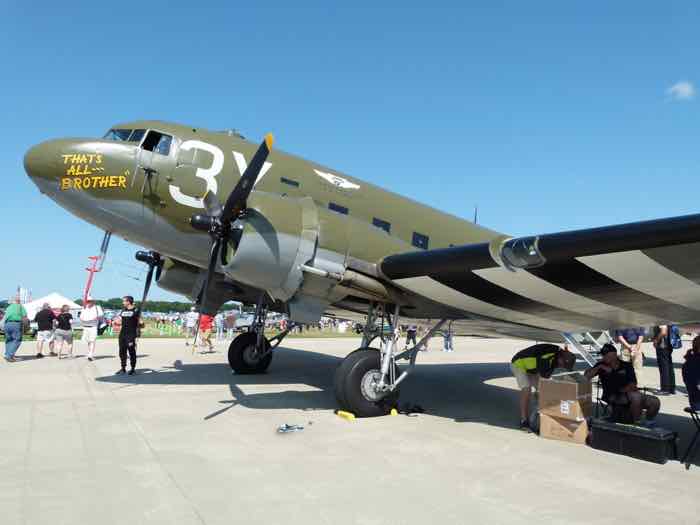 "That’s All Brother" was in Oshkosh 2018 to help promote this mission… and she will participate in Daks Over Normandy.  She is a beautiful example of the C-47 military transport plane.

This historic aircraft was the leader of the formation that dropped thousands of American paratroopers into Normandy on June 6, 1944, or D-Day, paving the way for the liberation of northern France from Nazi Germany.

Donate To Help Them

For a commemoration like this, a large number of people are donating their time and airplanes.  They have corporate sponsors, but any and all donations help to make this possible.

You can donate to the D-Day Squadron and/or to Daks Over Normandy on their websites (listed below).

For the Daks Over Normandy event, tickets will only be available in advance…

From February 1, 2019, tickets will be sold via this website.

As soon as the ticket sales start, information will be made available about public transportation, parking, accessibility, route planning, etc.

And To See All Of Their Information

Each website has more history and information about their commemoration plans.  To learn more about this monumental effort visit both sites.

D-Day Squadron and Daks Over Normandy.

If you read about this after the event, don’t you wish you could have been there?